David Tisherman is principal and founder of David Tisherman's Visuals, Inc., a national and international watershape design/build firm, established in 1979, with headquarters in Manhattan Beach, California. To serve the east coast market, Tisherman also opened Liquid Design, in Cherry Hil,l New Jersey, in 2001. Since 1979, he has advocated the highest possible standards for aquatic design, engineering, and construction. His education includes Bachelors Degrees in History and Industrial Design, and post graduate work at Pasadena, Art Center College of Design and Harvard, Graduate School of Design.

Named "The Frank Lloyd Wright of the pool industry" by Pool & Spa News, his educational background and award-winning design experience is unmatched in the industry. He is a master water-effects designer and builder, who understands the art of water and brings that vision to life without compromise. David’s expertise is not limited to the visual aspect of water effect design. His knowledge of structural engineering relating to soil conditions is known throughout the industry, and he has been retained in WELL-OVER 55 construction defect cases pertaining to improper and sub-standard building practices. The Robb report has referred to him as: “The Master Designer and Builder of the Pool Industry” and “The most influential pool designer and builder of the last 3 decades”.

David was a Department Chair, member of the Adjunct Faculty and Guidance Committee at U.C.L.A. He had taught architectural rendering and presentation, for more than two decades and was recognized as “Teacher of the Year in 1984”. His photography was used as the first poster for the Special Olympics in 1975 and he orchestrated and developed the opening ceremonies at the Kennedy Center on Special Education, that same year.

He has recently re-joined the faculty at U.C.L.A., Department of Landscape Architecture to create a class in the design and “proper” construction of water effects.

He is one of only two people to ever win "Best of Show" at the NSPI's International Design Awards Competition. At present, he is an “Industry Expert” for The California State Licensing Board.

David was the principal instructor and co-founder for the Genesis 3 Design Group, which is accredited by the I.A.C.E.T, and is recognized as the foremost educational body for the Pool and Spa Industry. He has since started Artistic Resources and Training, (A.R.T.), which specializes in education on: “How to design aquatic environments”. He has lectured extensively throughout the United States and Europe, conducting high level seminars to Landscape Architects, designers/builders and those interested in understanding design and construction of “water environments”.

In 2006, the television industry devoted a one half hour special presentation of David’s work and expertise. “Born American”, (featuring companies owned by, and individuals born in the United States), selects the best of a particular industry and then showcases the individual, company and philosophy, including the product. In 2007, CNBC flew to Los Angeles and Pennsylvania to create a segment illustrating elegant and luxurious pool designs and construction. It was then featured on “High Net Worth”, which aired for 2 weeks. Since 2004, David Tisherman’s Visuals Inc. is the only design/build company listed in the Franklin Report with a 5 star rating in all categories, to date.

David has also been published in hardcover books including Best of the Best, Best of L.A., Reflections on the Pool, California Designs for Swimming Pools, Dream Pools and the prestigious publications of Germany’s pool industry: Schwimmbad & Sauna and Handelsblatt.

In recognition of his skills as a designer and builder as well as his willingness to share what he knows with others in his profession and beyond, Tisherman is a recipient of The Joseph McCloskey Prize for Outstanding Achievement in the Art & Craft of Watershaping. This honor, initiated in June 2008 by WaterShapes magazine and intended for presentation only on a rare and occasional basis, is to be granted to the select few who embody the notion that watershaping is best served when information flows freely and all professionals have access to resources, tools and concepts that define practical and philosophical excellence.

Throughout his career, said Jim McCloskey, publisher of WaterShapes, and son of the man for whom the prize is named, “Tisherman has distinguished himself both in the excellence of his projects and in his skills as a teacher and mentor.”

“David’s students,” he said, “grow in sometimes profound ways as they open themselves to the power of his convictions, the value of his insights and the inspired way he examines a world where knowledge, education, quality and professional performance truly matter and watershaping aspires to be an art form.” 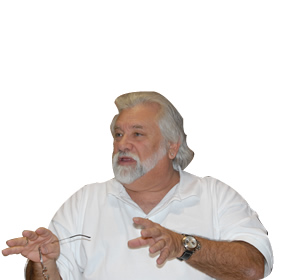